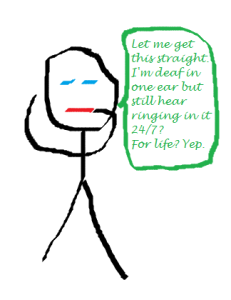 After surgery to remove my acoustic neuroma brain tumor, I learned that the surgeons needed to remove my auditory nerve.  I also learned, as my doctors had predicted, that I still had tinnitus, or ringing in the ears.  It’s always there, but I have learned to ignore it – unless, like right now, I’m trying to describe it 🙂

Walking on the beach is the only time that I “kind of” don’t hear it because of the waves.  Walking the beach and getting a short break from the ringing is always soothing to me.

Many people are confused by tinnitus – in general.  And those of us who are single sided deaf finding it even more puzzling.   In trying to find answers, I’ve done some digging around and asking.  It isn’t really understood, but one description made sense to me.  The sound is in the brain — not in the ear or nerve itself.  The brain, struggling to hear, has turned up the volume.  Being deaf in one ear confuses the brain because there is nothing to hear, so it turns it up again.  Thus, louder ringing than prior to surgery.

Tinnitus is frustrating, because like headaches, you can’t always describe it OR prove its existence.  It has different sounds for each individual.  For me, it varies in volume throughout the day.  Noisy settings will cause the volume to increase for hours afterward.  It’s louder in the morning right after waking.  And I have a change in pitch if I move my eye in any direction.

Tinnitus is not currently curable.  Research is looking, and there are some therapies available that condition your brain to better cope with it.  I have not pursued anything at this point.

I recently learned of the following website, which has recordings of different types of tinnitus.  Mine is a combination of screeching and tea kettle sounds.  You may find it interesting to find your tinnitus sound:

2 thoughts on “Tinnitus with Single-Sided Deafness”