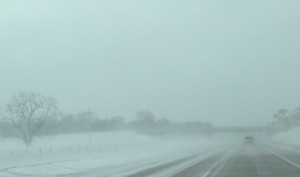 I’ve always found it difficult to navigate the tricky line between giving up and pushing on. I do know and will even acknowledge there is a time for both. I learned today what a polar vortex and acoustic neuroma brain tumor have in common.

Today I had to be in Grand Rapids, about an hour north, for a doctor’s appointment. The news said to stay off the roads. Google Maps said traffic was fine. My look out the window said “so-so.” My head complained. I had to make a decision once the appropriate departure time came – after calculating travel time with extra bad weather minutes added in. Always one to push things to the limit, I headed out.

It was blowing with spots of snow as I headed out on the north-south highway. I could see the wind gusts whirling across the road because each picked up stray snow from banks along the side of the road. I drove carefully — my hands at ten o’clock and two o’clock and the speedometer below the speed limit. I always ensured a good bit of distance between me and other cars because I know that, as in life, it isn’t always our direct action that brings accidents, drama, and unwanted events.

Suddenly, though not surprisingly, traffic stopped ahead of me. We all crept along, blinking tail-lights for those behind us as a warning to slow down. When we reached an exit, some very yellow firemen had the road blocked off with their very green emergency vehicle with red flashing lights. We were all forced to exit the highway. It was shut down.

I didn’t have a option to continue on the same path.  I also didn’t have an option to just stop and give up.  I DID have a choice to to go north or south once I was off the highway.  Should I head home or keep moving, via an alternate route, to my appointment?  I had input.  I called Kayla (hands free) and asked her to check the map. Her input?  “Mom, just go home.” I called the doctor’s office to tell them that I didn’t think I could make it. His input was that he didn’t see anything on the internet map, but I could change my appointment. It was up to me. I could ask God for His direction, but it was me who had to turn right or left. I had to turn when I reached a T in the road (or annoy a lot of cars behind me).

For once in my life, I gave up. I reluctantly, but very carefully headed south. However, I was now on a country road and found myself in a complete white-out. I turned on my emergency flashers and carefully watched ahead as well as behind for other vehicles. Even though I had acknowledged that my day had changed, the battle wasn’t over.

Eventually, I found myself out of the snow and safely home. I still wasn’t happy about relinquishing control to mother nature, but it was clear that I made the right decision when I heard that the swirling storm had closed multiple roads. I accepted getting safely home to rest up and reschedule for another day.  I am hearing whistling, violent wind and watching trees wiggle and bend even as I type this.

Acoustic Neuroma brain tumors are like that. We don’t ask for the storm that they bring. We try to keep going. Each person encounter’s their own version of the storm. Someone was in a vehicle ahead of me in the accident that closed the highway. They were “worse off than me.” Someone took the detour and kept going. They eventually reached their destination – or encountered more delays. It may have only been a bump in the road for them. Those folks were “better off than me.” However, everyone on the road today was effected by the storm. Everyone in the Acoustic Neuroma world, including family members of AN recipients, is effected by the storm.

I’d never heard of a polar vortex until this winter. I had never heard of an Acoustic Neuroma before learning that one was camped out in my head. It didn’t mean they didn’t exist. It only means that they hadn’t been drawn to my attention on my journey.

When do we give up on finding treatment for head pain, or dry eye, or facial paralysis issues? How do we adjust to and find ourselves apologizing for our single-sided deafness in noisy settings? When do we turn around and go home for a while? When do we head out again on our life’s journey? I don’t have a precise answer – only that we have to keep moving forward at whatever pace is right for us individually.

1 thought on “Polar Vortex and Acoustic Neuroma? Do I give up yet?”