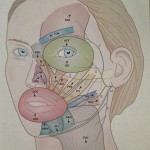 The first time I visited my facial therapist, Jackie, I learned a lot about facial muscles. Some pull up, and some pull down. Some are rather large, while others are narrow yet long, or short and wide. It had been almost a year since my surgery and the side of my face was just starting to move a bit. Jackie gave me the above diagram and explained to me that while my face was initially paralyzed on the right side, it was now a combination of paralyzed and frozen. While some movement had returned, it immediately had been frozen by muscles that quickly went into spasm. (She also explained Synkinesis, or the mis-wiring of the healing nerve, but I’ll address that another time) What?

Simply put, the brain had been trying to use those paralyzed muscles for so long that it tried too hard. So, when movement returned, the brain kept up with an intensity that was more than needed – causing Charlie Horses in my facial muscles. “But it doesn’t hurt. . .” I protested.

She explained that facial muscles experience Charlie Horse spasms just like your leg muscle in the middle of the night. Except, unlike leg muscles, facial muscles aren’t connected to bone at each end. “What?” She talked me through massaging, stretching, and squeezing various facial muscles until they did hurt. Releasing a facial spasm involves a combination of no pain but a lump, followed by intense sharp pain, and then a quick flash of more pain before it gives up and relaxes, now pain free and lump free. Allowing the muscle to now move as much as it can at this point – possible quite a bit and possible very little.

Acoustic Neuroma patients often have a characteristic look in the face. The lip comes up a bit with a flat motionless nostril. (Looking at the diagram you can see that several muscles come together in that lip/nose area.) In the summer of 2010, during a visit almost two years after my surgery, Jackie asked me to focus on the muscles in my nose. After having me push the very corners of my nose up like a pig snout, I laughed, but felt and saw a change. However, when she asked me to put my thumb in my nose and squeeze the side of my nose between my fingers, I looked at her. “Trust me,” she said.

“Well, ok.”  So, I put my thumb into my nostril and squeezed my first finger and thumb together. (Just fyi, there’s lots a sanitizer involved in facial therapy sessions.)

I looked in the mirror on her desk and sniffed. The side of my nostril moved for the first time since surgery. My eyes got big and I grinned. “Did you see that?  I got my sniff back.” And I sniffed again. And again.

And just one more time. “sniff”

7 thoughts on “Facial Paralysis: The Day I got My Sniff Back”