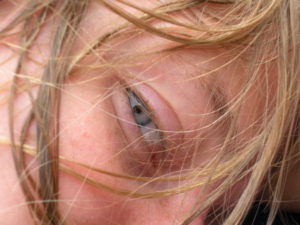 Part One – There’s a lot to say here, so I’ll continue in the next post.

When I was diagnosed with an Acoustic Neuroma, one of the things that I read about was the effect on eye health.  That just didn’t make sense to me. I read about dry eye, gold weights, and patches. It all sounded rather horrifying and I quickly discounted it as anything that I would have to deal with.

After surgery, life taught me otherwise. I learned a lot about eye health — I no longer had the luxury of ignoring it. When I woke from brain surgery, the nurse put drops in my right eye every few minutes. In my confusion, I didn’t understand why she didn’t put them in both eyes. It even occurred to me that I didn’t understand why she was doing it at all. However, I noticed that after keeping my eye open for a couple minutes it would get dry. Then it started to sink in — my face was half paralyzed. There were many issues to deal with, but for now I’ll just talk about my eye.

My facial nerve was stretched across the tumor like a ribbon.  After surgeons spent hours irritating my facial nerve by separating it from the tumor, it stopped working. They were confident that at least some movement would return to my face, but they didn’t know when or how much. It would be at least 6-7 months based on a nerve regeneration rate of an inch a month.

Since facial muscles also involve the muscle that close the eye, blinking became something that I had to think about. The muscles responsible for opening my eye were not affected, so opening my eye was not a problem – just closing it. My normal, left eye was finished with a “normal” blink while my effected eye had only made it halfway. I had to learn to think about making a complete blink. I had to close, relax, and feel my eye close fully. On top of that, the eye had lost its ability to tear, effecting the eye as well as sinus on my right side.